Danziger to intrigue visitors at the Aalsmeer trade fair 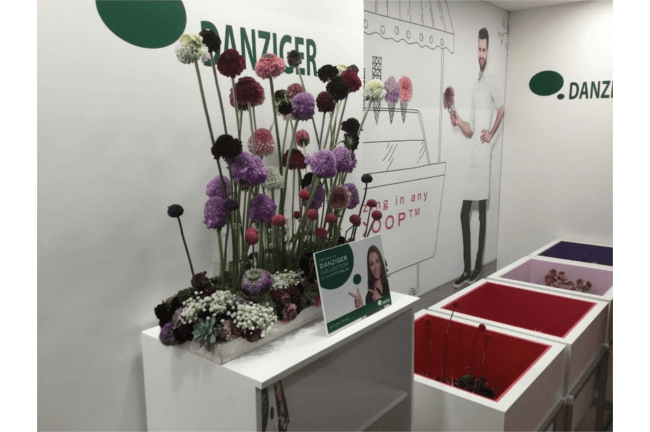 Visitors who walked around the different booth and displays last week in Aalsmeer were surprised to see Danziger’s “SCOOP™” display.

No designed bouquets on high platforms “shouting out” their marvelous appearance were there. Actually, at first glance, the display looked almost empty, with only one large arrangement on the stand.

Instead, mysterious boxes were aligned in a row, inviting curious visitors to get closer and take a peek. Inside the boxes, laid an extraordinary arrangement, made by Astrid Van Der Berg using different colored plates for the SCOOP™ Scabiosa series, which is receiving much recognition in the market and is constantly on the rise.

“Having double appearances at once, one  at the IFTF and one in Aalsmeer, encouraged us to have some fun and take risks. We decided to be different, and use our Aalsmeer display to attract more attention, not by being “louder”, but rather by being “unique”” says Liat Kaplan, Global Marketing Manager.

Reactions were positive and enthusiastic with many passersby who could not resist the temptation to get closer and look down to “search” for the lost flowers of the display.

“We say “imagine more” and we mean it. We encourage each of our employees around the world, no matter what discipline they come from, to always try and “imagine more”, bring more value and progress to our company and industry” says Ori Danziger, Deputy CEO.

The SCOOP™ series continues to collect awards, after the winning of Blackberry SCOOP™  at the Glass Tulip in 2014, when it was just introduced – Candy SCOOP™ picked the 3rd prize at the Dutch Tulip award held by FloraHolland early November.

6 Danziger Collections that are Changing the Game

Breeding quality flowers requires a delicate mix of art and science. While a creative flair is required to successfully capture the market’s imagination, it’s the science that delivers on those promises. Danziger, a floriculture company that has been bringing innovative offerings to market since its inception in 1953, knows a bit about ornamental plants. The process begins with a dedication to breeding for the right genetics. “Danziger’s approach to innovation is in the breeding, and we do things by necessity,” says Mike Fernandez, Market Manager North America for Danziger. “Normally, Danziger will decide on a model and breed towards that…