Acres of Buzz from Spring Trials 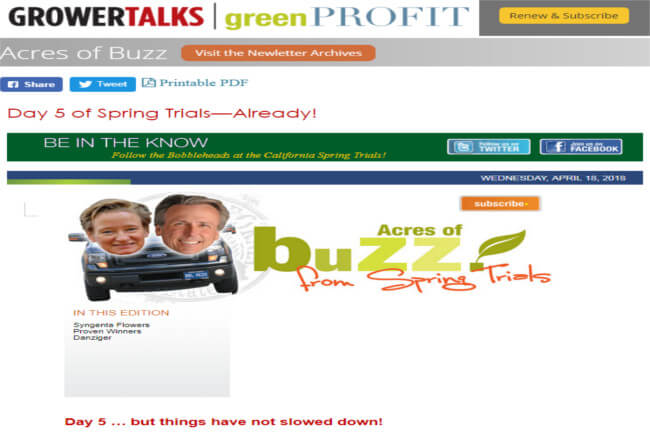 Day 5 … but things have not slowed down!

Chris: Alas, we must move on from Proven Winners to Danziger, which always holds its trial at Headstart Nursery, directly behind Garlic World (home of garlic ice cream). A good selection of new additions here, but Ellen and I will each pick a favorite. For me, I like that Danziger is doing what several other trials are doing: simplifying their lines. Take their Noa Calibrachoa, for instance. Lots of varieties and subseries. Very confusing. So they’re going to eventually drop Noa as a series and instead upgrade everything and give them their own series name based on habit.

For instance, Lia is their hanging basket series. It features tight internodes and lots of flowers. Daylength is just 10 hours, so it’s easy to flower early. Lia starts with four colors.

Also getting a new addition is Colibri, their compact calibrachoa series. It’s been tested to produce a good-looking 4-in. pot, but still finish nicely in the garden. Lemon is the new one in this series. Okay, Ellen, your pick from Danziger?

Ellen: I’ll pick Sunstrong Bicolor Purple Erysimum. Fans will know we’ve run into Erysimum several years ago, but Danziger’s version needs no cooling at all. Grow it like an annual, we were told, put it in gallons or larger, and extend your season on either end. The color is an interesting pale purple and salmon or peach.

NovemberFest 2020 Goes Virtual – Traveling to Israel has never been so easy!

NovemberFest 2020 Goes Virtual – Traveling to Israel has never been so easy! Come explore Danziger’s bedding assortment and novelties for the 2022 season in its first-ever virtual NovemberFest.   NovemberFest, Danziger’s flagship annual event, marks the kick-off of the new season and a chance for industry leaders – growers, retailers and distributors – to explore the company’s latest genetics and assortment from its R & D facilities in Israel. As usual, this year’s event promises customers and partners from around the world a chance to see the company’s assortment in full bloom, as well as discover the novelties and…

“WE GROW EMOTIONS” That is the insight behind Danziger’s new Chrysanthemums Portfolio strategy. Danziger MUMs assortment and innovative breeding will be presented at Danziger’s Open Days, August 24th -29th (week 35), in Antioquia, Colombia. Different studies show that flowers are a powerful inducer of positive emotions. Living in an environment surrounded by flowers or just buying or receiving flowers have a significant impact on our dopamine, serotonin and oxytocin levels that cause the body to feel excited and full of energy, relieving stress and making people feel happier and thankful. “This was the foundation for building our new strategic chrysanthemum…

Danziger Open House In the Netherlands

We invite you to explore our novelties and highlights for 2021 in a live presentation presented by Imperial Plants in the Netherlands. This event is especially planned to enable our partners to evaluate our new series and varieties for the coming season. 9-12 JUNE, 2020 , 09:00-17:00  , IMPERIAL PLANTS, Anthuriumweg 43 2665KV Bleiswijk Holland Meet Danziger’s R&D representative Take a tour with Koos Van Der Klugt Attend a ZOOM meeting with the Danziger team in Israel If you would like more information or would like to plan a private tour, please contact Gdańsk EU Market Manager Ayala Zilberman Mobile: + 972-52-8477510…